“Electricity Regulatory Authority (ERA) has under section 29 of the Electricity Act 1999 received a notice of intended application of a licence from Bonang Power and Energy(Pty) Limited for the generation and sale of electricity from a hydro power plant proposed to be established near Murchison falls in Kiryandongo and Nwoya districts,”

According to the announcement dated 7th June 2019, the two companies are set to do feasibility studies and other activities leading to the development of the hydro power project along the Murchison Falls.

The authority has subsequently asked any parties affected directly or indirectly by the move to present their comments to them.

Lily Ajarova Uganda Tourism Board, Chief Executive Officer In a post on her official Facebook page, described the move as being an act of madness to destroy an iconic feature. “Who in their right mind would want the destruction of Murchison Falls, an iconic feature that is spectacular and none like it elsewhere,” the executive officer wondered.

“The ecosystem of Murchison Falls National park has both endemic and endangered species that if destroyed will not only affect the nation but the global community with species extinction, climatic change, among others. There are options for the required development. The Murchison Falls must not be destroyed.”

Amos Wekesa, another tourism enthusiast did not have kind word to the move that he described as utter nonsense.

“We want to destroy every forest, every swamp, every water falls in our life time? Are we the last generation,”Wekesa wondered. “What are we conserving for the next generation? Imagine if our ancestors had destroyed everything!!”

Jonathan Benaiah, the spokesperson for the Association of Ugandan Tours Operators said the move should be opposed by every sane Ugandan.

“Why are we so much after short quick gains at the compromise of natural resources which other nations can only wish they had? Crazy people to say the least,”Benaiah said. “This country’s shallow-minded priorities; I still do not get. Maybe they should go ahead and compensate tourism investors rather than singing praises about the tourism sector being a leader in forex earnings; but only turning around to bring an axe to its neck thereafter.”

Well, this announcement has not been received with wide open arms by the tourism industry in Uganda. As nature lovers and an advocate for conservation for generations, Uganda Safari Chapter would say that this move is a blind one, one that is misleading the country into losing one of its iconic Sceneries. Murchison Falls has caused men and women from all over the world and from all walks of life to come visit this beautiful country, destroying it would be termed as greed.

Conservation means development as much as it does protection. We recognize the right and duty of this generation to develop and use the natural resources of our land; but we do support the destruction of its natural beauty. IWe stand to protect Murchison Falls dearly for the generation to come after us, “If conservation of natural resources goes wrong, nothing else will go right” - M.S. Swaminathan.

Here are some facts about Murchison Falls National Park

Say no to this move by signing a petition to #SaveMurchisonFalls 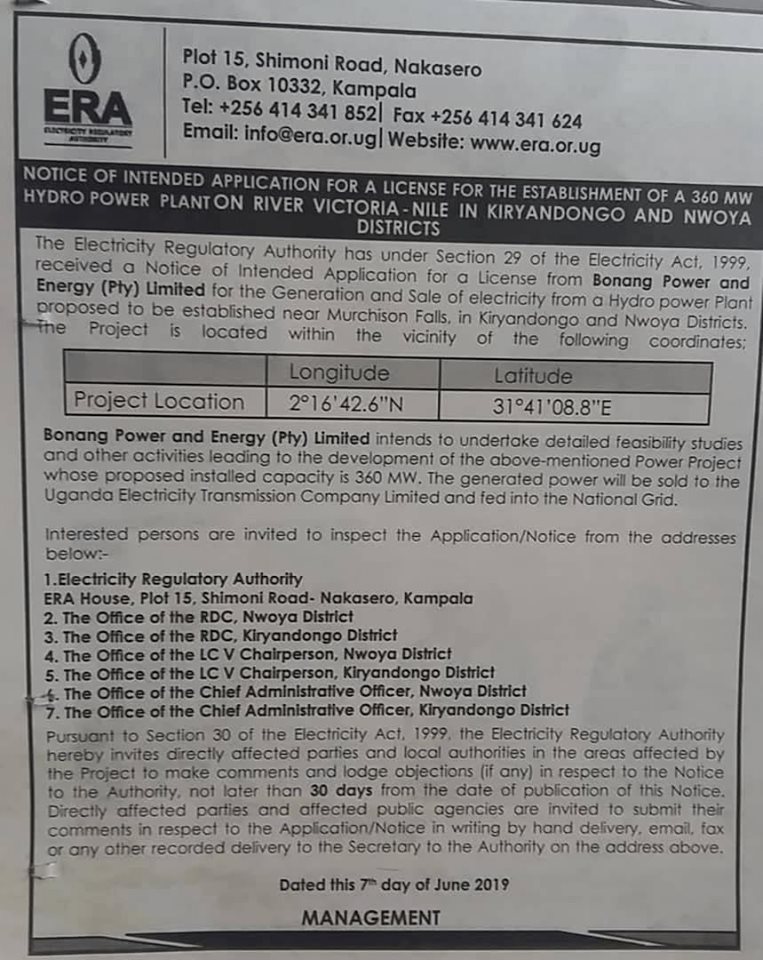